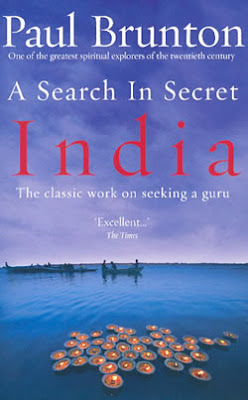 Understanding spiritual history of India is not all that easy. It traces back more than 3500 years in time and most of the contemporary interpretations exist in deteriorated form. The current state of affair is so pathetic -- sometimes makes one feel spirituality is worthless. At the same time, developing deeper connection with spirituality is very critical in order to achieve harmony within. Especially in the current materialistic environment, human beings have become more cynical, thereby closing all doors of self realization. In the current setup spirituality needs to be approached from a western, critical perspective where it can be learnt by applying logic. The book 'A search in secret India' is one such spiritual account written by a westerner with an analytical approach. For present day Indians it provides a simple, logical but very insightful journey into spirituality.

The book starts with the author Paul Brunton, a British embarks on a journey to India in 1930s. His interest was kindled by his Indian friend living in England, who provides him certain insights into simple living by embracing spirituality as a way of life. Upon driven by this spiritual quest he reaches Mumbai. This book covers his experiences and memoirs about India and his search for spiritual Guru. Even though this book comes under non-fiction category, Brunton's story telling style might make certain chapters boring. After landing in Mumbai (erstwhile Bombay), he first meets an magician from Egypt near the lodge he was put-up. The magician plays certain tricks thereby demonstrating his ability to make certain things vanish and come back again. This leaves Brunton with some amusement but he was not able to understand or feel anything spiritual about it.

Followed by Mumbai he continues to travel towards South. On his way he meets many holy men, some genuine and some are fake. He also sees people who can perform actions that can't be explained by physics, like turning a seed into a plant in a minute and people who are not affected by poison. Of the former he discovers to be a mere magical trick while the later remains unexplained, attributed to Yogic power. In Adayar, Chennai (erstwhile Madras state) he meets up with a young yogi, who was able to provide certain analytical perspective of Yoga. The ‘anchorite of the Adayar river’, what Brunton calls this young Yogi performs certain breathing practices, thereby he could demonstrate Brunton the ability to control heart beat, bring down the pulse, remain in solace for hours together. Then he goes on explaining the inner workings of Yoga, which starts from understanding inner meaning of breath. According to this Yogi, the life of human beings is not controlled by the years they live but the number of breaths one takes. Upon learning certain breathing techniques, explained in ancient Yogic texts, one can reduce the number of breaths compared with time, thereby increasing lifespan. Many of the mystic Yogis living in Himalayas are able to master this technique and live for many hundred years. The Yogi goes on saying that how important it is for human beings to repose and take control of their breath.

There is been quite some amount of research happening about certain species living in extremely cold continents like Antarctica and how they are able survive and live longer. The study showed that the fishes in Antarctica activate a seasonal switch in ecological strategy – going from one that maximizes feeding and growth in summer to another that minimizes the energetic cost of living during the long, Antarctic winter. The research demonstrates that at least some fish species can enter a dormant state, similar to hibernation that is not temperature driven and presumably provides seasonal energetic benefits. Scientists already know that Antarctic fish have very low metabolic rates and blood ‘antifreeze’ proteins that allow them to live in near-freezing waters. This study demonstrates that Antarctic fish - which already live in the ‘slow lane’ with extremely low rates of growth, metabolism and swimming activity - can in fact further depress these metabolic processes in winter. The Yogic methods place human beings into a similar hibernation state by controlling their breath.

With the help of Adayar yogi, Brunton comes across another sage near Chennai who never speaks. By locking himself into a small room the sage remains in 'Samadhi' (the ultimate state where a human being in completely connected with the bigger universe outside) for days together with hardly eating anything. His eyes remain frozen for hours together without even blinking, which leave Brunton with strange experience. After waiting for hours together, the sage comes to normal stage and communicates with others by writing. Followed by Chennai, Brunton travel further south and gets an opportunity to meet the spiritual guru Shankaracharya. Based on his instruction, he further goes to Thiruvannamalai, where he meets Ramana Maharishi. Initially the Maharishi hardly gives him an opportunity to meet and never talks. After many attempts he was able to interact with him. The Maharishi urges him to start connecting with the spiritual plane by asking the question "Who am I?" to himself. This leaves Brunton with surprise, happiness and fulfillment. In the later chapters he explains about some other magicians and prophets he had met in Southern India.

This book is a very good read for anybody, who wants to start understanding India in a deeper sense. It also helps the reader to start thinking about spirituality in a step by step manner.
book review India spirituality

Anonymous said…
I am really loving the theme/design of your blog.
Do you ever run into any browser compatibility issues? A few of my blog audience have
complained about my site not working correctly in Explorer but looks great in Safari.
Do you have any solutions to help fix this issue?

Anonymous said…
Piece of writing writing is also a fun, if you be familiar with after that
you can write if not it is difficult to write.

Anonymous said…
Generally I don't learn post on blogs, however I wish to say that this write-up very pressured me to check out and do so! Your writing taste has been surprised me. Thank you, quite great article.