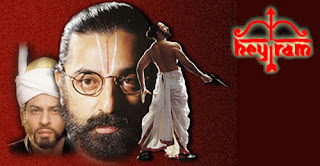 On Independence Day, one of the TV channels aired Kamal Haasan's ‘Hey Ram'. I have a long, transformational and emotional journey with that movie. Way back in 2000 I watched it during my college days along with one of my friends, upon his compulsion. I felt it was a total junk, where I commented that Kamal put together multiple documentaries to form of a movie. I hardly understood the movie and cursed my friend for wasting my time and money. After all, spending 14 rupees for a movie ticket along with 6 rupees for the transportation (share-auto) was a big deal in 2000.
Cut to Bangalore. It was the year 2005 (Oct 2nd, Gandhi Jayanthi to be precise) and the same movie was shown in Sony channel. I was alone at my home as my room-mate had gone to office to fix a customer facing issue. As no other movie was aired during the same time, I started watching the movie with more concentration. By 2005 I was mature enough to understand the world better and read few chapters from Gandhi's 'My experiments with truth'. I was able to connect to the movie much better this time and watched each and every scene with full attention. By the end it, the message of the movie hit me very hardly. I am not a very sentimental person, but tears started rolling out of my eyes without even me realizing it. Vow! What a wonderful movie about a great person.

For people who are not aware about Hey Ram here is a brief about the movie. It is basically a fictional story made by Kamal Hassan which revolves around India-Pakistan partition, violence that shook the country during partition, plot behind Gandhi’s assassination and raise of Hindutva ideology promoted by Veer Savarkar. Kamal plays the role of an Archeologist (Saket Ram Iyengar) who's Bengali wife Aparna (Rani Mukerjee) was raped and killed by their Muslim servant. Upon disappointment and anger, Saket starts killing every other Muslim in the neighborhood. In the bloody, violence hit Calcutta streets; he meets a Hindutva activitist Shriram Abhayankar (Atul Kulkarni) who plants Hindu fanatical thoughts in Saket's mind. Abhyankar also tells that Gandhi is the whole reason for Muslims getting undue advantage in a country, where Hindus form 85% of the population. Then the movie takes multiple turns where Abyankar and Saket were chosen to kill Gandhi. Due to an unexpected accident, Abyankar becomes bed ridden and Saket moves to Delhi to do the job. The main turning point happens in Delhi, where Saket meets his old Muslim friend Amjad Ali Khan (Shah Rukh Khan) in a communally tensed area. The series of incidents and Khan's death transforms Saket and confronts that blood-for-blood is an incorrect ideology. There on Saket becomes a Gandhi follower and lives reminder of his life by following Gandhi's principles. The last 45 minutes of the movie (transformation of Saket) is really a wonderful piece to watch.

Even after 62 years, many Indians feel that Gandhi's ideology and non-violent way of getting independence to India is incorrect. Many still believe that he played significant role in making Indians as cowards, by not making them fight against the British face to face. They also believe martyrs like Bhagat Singh, Chandra Shekar Azad did the correct thing by killing some British folks. Especially after 'Rang De Basanti' these martyrs have become superstars among young Indians. While I am not discounting the sacrifice made by these great martyrs, I feel Gandhian way is the most appropriate way to get independence for India. Here are the some of the reasons.

First, India is the most diverse country in the world. There are multiple languages, customs, religions and rituals are followed in various parts of the country. It’s impossible to unite them in the name of language or religion (which was in case in other revolutions happened in the world) other than Nationality and non-violence. If not for that method, Gandhi would have failed to unite the whole country. Taking the rebellious path and shooting somebody would have resulted in short term benefits but it would not have resulted in a democratic India. Every other country which got independence with the help of the gun couldn't sustain them beyond certain point.

Second, India was ruled by a lot of kings in the past. The country was divided into many pieces during different rulers. The colonial approach of the British once again kept the country under their rule for more than 200 years. From there India matured into a powerful, vibrant, constitution based democracy today. According to me, this change is really huge which required a properly planned transition. If not for non-violent approach, it would not have been possible. During the same time, Pakistan took the dictatorship approach and everyone knows the pathetic political situation even today. Even a country based on Muslim religion couldn't sustain itself with dictatorship, let alone diversified country India. It would have been torn into pieces, which would have resulted in a civil war. Gandhi's non-violence sowed seeds for a mature approach.

Third, Gandhi's approach was inclusive. It included women, who were not accepted in the society for centuries together. By making them participate into nation's independent movement Gandhi, made them realize their self worth and esteem. Apart from women, he also brought the downtrodden Harijans, who were treated like animals by denying basic rights for thousands of years. If not for this inclusive approach, we would have still not given basic voting rights to women and continue ill-treating Harijans even today. I am not saying all the problems against women and Harijans are addressed, but Gandhi's thought process set stage for reforms and changes to be brought to address every other sectors of the society.

For me understanding Gandhi is a continuous journey. From debunking Hey Ram in 2000 to adoring the same in 2008, I have come a long way. Looking him and his ideologies at periphery might not make sense but deep thoughts do clear many things about him. It is his leadership and non-violent movement made India what it is today. Movies like Hey Ram play a significant role to pass on the message of Gandhi to future generations.
Democracy History India Media Society

Bala Girisaballa said…
Hi, I am not going to comment on the Gandhian issue here but what is interesting is that each of us go through transformations in life and the best way to benchmark is to go through the same experience at different phases of your life - which is what you did here. I met an old college mate after 13 years the other day. He said that nothing has changed in him since he left college. I remarked that nothing has been the same with me since I left college!
11:50 AM

Jayakumar Balasubramanian said…
Transformation happens when an individual is committed to learn and explore new things in life. I have also seen many of my friends stop learning ever since they get out of formal education system. Thats the reason I feel they are not seeing any changes in their lives.
1:41 PM

Jayakumar Balasubramanian said…
Very true Sourav! The more we learn and understand many things, our perceptions do change.
5:48 PM

Unknown said…
Yes Anna.
Hey Ram is a great movie about Gandhian philosophy and I also did not like it first time. But in my opinion, Dasavatharam can never be considered even a decent movie.
3:40 PM

Jayakumar Balasubramanian said…
Dasavatharam's screenplay is one of the worst I have ever seen. But it became a super-hit because of its masala front-end. The true crux of the movie (chaos theory demonstration using 10 characters) will never be understood by people. I was discussing about Anbe sivam Vs Dasavatharam also with one of my friends. Will write a post on that soon.
6:44 PM