Voted for the first time

May 10, 2008
Karnataka state assembly polling was held today. I got an opportunity to vote for the first time. Fortunately the election commission announced that citizens can a use a list of identity proofs (apart from electoral ID cards) for voting. For the past two weeks I tried to get the electoral ID cards, but no success. Long queues, screwed up computer system, incorrect entry of my name in two different wards made my life miserable. In spite of spending more than 7 hours I was not able to get the card. Luckily, using the PAN card and voter's slip I was able to vote today (see picture below). 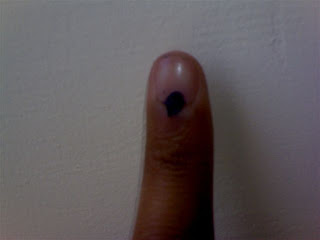 I have been staying out of my hometown for the past 10 years. Initial 4 years went for engineering education. After that I came to Bangalore and tried to get my name enrolled into the electoral list for quite some time. During last assembly election I was not able to get proper contact information and missed the chance. This time I made it a point to do it without fail. Fortunately things were much easier this time as I am staying in an apartment complex.

I was just thinking the power we have in a democratic setup. Every individual has got equal opportunity to choose their leaders and determine the fate of the country. Unfortunately educated people are not realizing it at all. They read Times-of-India, talk English, eat pizza, hang out in coffee-day, and crib about everything starting with bad roads. When it comes to voting they feel its waste of time. As of 11 AM, only 8% turnout happened in Bangalore urban.

Here is the live update from CNN-IBN's H R Venkatesh:

11 am: The Election Commission's statistics have come in for 9 am. Bangalore Urban has seen 8 per cent turnout, areas under the BBMP region have accounted for 10 per cent and Bangalore Rural has seen 15 per cent. Rural Karnataka has seen 20 per cent turnout. The signs are encouraging in rural areas, but pretty disappointing in urban Bangalore. Let's hope things pick up!
India Society