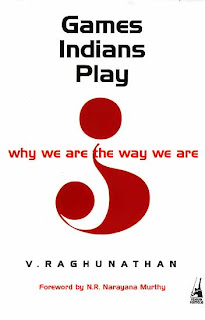 In 2002, I visited for the first time. During transit I spent some time in and Hong-Kong. I was totally shocked to see the great infrastructure, well defined rules, robust systems and responsible individuals. After I got back to , I was frustrated and disgusted to see the Indian system. We Indians just don’t follow any rules; Even if we follow, it is short lived. Take example of Indian roads: We can’t lay good roads; Even if we lay, we will not maintain it; within months, the newly built road will have numerous potholes; Added to that we spit, throw garbage, urinate on it and make sure it is spoilt to the maximum. This phenomenon is very unique in the subcontinent. Take the well developed western world, Middle Eastern and south East Asian countries – they all well built and properly maintained.

After some more experiences, I learned that it all finally boils down to an individual’s behavior. Even though Indians are as smart as anyone else in the world, what makes us to behave the way we do? Why can’t we follow basic rules by taking responsibility? The same Indian follows rules, exhibits basic civic sense, and drives properly when they travel or migrate to other countries. This has got nothing to do with culture, tradition, education, rural-urban divide, globalization etc. It is just the way we are; what goes behind this ‘Indianness’ behavior?

On top of all, I had very interesting observations when I visited earlier this year. The whole of is clean and rule-bound. But there is an area called ‘Little India’ where things are totally out of control. I can just cross the road without even bothering for traffic signals, just like the way we do in India; The interior streets of Little India really stinks and I have seen people even spitting on roads in late nights. Some of my friends in told me that the government couldn’t impose the rule in Little India area in spite of consistent efforts. How can I explain this behavior? Wherever Indians are living in larger chunks and form a community, the system goes for a toss (Another example: in New-Jersey area). Why on this planet we Indians are like this? If we can boast of having a great system for sanitation during valley civilization times, why the system is in pandemonium now? While I can give a whole lot of philosophical explanation for this condition, it always great if somebody gives an analytical perspective of the situation. The book ‘Games Indians Play’ just does that and much more.

The Author Mr. Raghunathan (professor at IIM-A) came across very interesting observations when we was teaching ‘Game Theory’ for his B-school students. Basically Game Theory is a mathematical technique, used by economists in the behavioral context. Using some of the principles of Game theory (especially prisoner’s dilemma) author has tried to characterize the whole behavior of Indians. The author has mapped the game theory with practical situations, which gives great motivation for the reader. I was getting multiple feelings as I was progressing each chapter; Sometimes I felt like a student; Sometimes I broke into laughter; Sometimes sad; Sometimes guilty; At the end of the book the author leaves the reader with an urge to do something to make the system better by exhibiting default ‘co-operative’ behavior. In the last chapter he compares Game Theory with Bhagavad-Gita, which left some ever last lasting impact on me.

In conclusion, this book is a must read for every educated Indian. As an engineer I was able to appreciate the book better as it combines analytical and emotional aspects of Indian behavior. As is becoming more important piece in the world map by growing economically, behavioral change is the need of the hour to sustain it. Books like ‘Games Indians play’ are very critical to sow seeds for the behavioral change. If not anything, at least the reader will think before throwing garbage or spitting on the roads.

Related posts:
India : A garbage land
Am I proud to be an Indian?

Anonymous said…
Truly, amazing book! I practically finished it in one sitting.

S m i t h a said…
i started reading the gita after reading the final chapter. left a lasting impression on me as well..
6:38 PM

Jayakumar Balasubramanian said…
Thats glad to know Smitha. Please provide me your blog site link. I am not able to get it from your Blogger profile
6:47 PM

Jayakumar Balasubramanian said…
Thanks Smita. I have added it to my favorite blog list.
5:33 PM