November 06, 2007
For the past month or so the Indian rupee is getting stronger against the American dollar, which has come down to 39 INR compared to 45 INR. This is already bleeding Indian services companies and their Q3 numbers speaks for that. When the rupee was getting weaker these service companies used to make 4-5% of their margins just by keeping their money in dollars and converting them back during the results announcement. Nowadays Indian service companies are mulling multiple options to resolve this problem -- six day working week, reduced hike for employees, productivity improvement, moving to lower cost geographies (like China and eastern europe) etc. With STPI tax sops are getting withdrawn by 2009, Indian IT companies are having challenging times ahead.
Let me take the example of product R & D happening in Indian companies as an example. Of course value creation can be done at multiple levels apart from R & D as well. Majority of MNCs which are having their engineering centers in India are working in the 'Offshore R & D' or 'Engineering services' model. In this model, the offshore team owns majority piece of the SW that goes as a part of the product and take the complete 'delivery ownership' from India. This is slightly better than the 'pure-vanilla-service' model which Indian service companies (like Infosys, Wipro etc..) are offering majorly.
To understand this slightly better, let me take 'Core vs Context' framework introduced by Geoffrey Moore's latest book 'Dealing with darwin'. Let us understand the four quadrants with
some new definitions:

Core: Processes that enable and amplify your chosen vector of competitive differentiation
Context: All other processes

This Core and context can be again classified on 'Mission critical' and 'Non-Mission-Critical' which leads us with four quadrants. See the picture below to get a better idea: 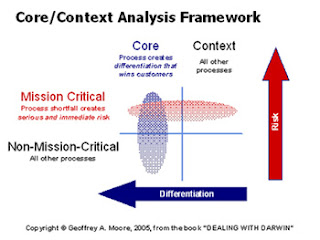 Indian service companies, which are offering 'pure-vanilla-service' come under the bottom right side of this model, which is popularly known as 'outsourcing'. There is very little value addition can happen here as it falls under 'non-core' activity.

The offshore R & D organizations are operating under the top-right quadrant. This means the activity is 'mission-critical-but-non-core' portion. For example: if a company is working on a enterprise router, the offshore R & D team can work on adding new features, maintaining the existing code and do some level of program management. From the business point of view this is critical, because the product is generating revenue for the company at present. In a way this quadrant is higher in the product value chain, but still it is not coming under the 'core' portion of the company's strategy. Because the work the offshore entity doing is not providing any 'competitive differentiation' to the parent company. On the other hand, the parent companies will place all the resources into developing core portion of the product.

Sitting in places like India, contributing into the 'core' portion is extremely difficult. Following are the major challenges Indian companies are facing now:


Now, how does the future looks from here on?

At one end its hard to imagine any US/UK based company to offshore the 'core' work because it doesn't make business sense.On the other end the offshore entity can't do much because they don't know the customer. In a way the 'offshoring' is stuck in top right portion (quadrant-III) of the Geoffrey Moore model. In my perspective, it will continue to stay there for a long period
of time until the local market gains significance. The local market growth will mainly depend on multiple factors like: Good governance, robust infrastructure, litracy and technology awareness. I would say the 'india-offshore-story' has just begun and it is foolish to start celebrations at this point in time. These companies have got to cover much more distance before they really achieve 'value creation'.
business economy emerging markets India IT.India technology

Unknown said…
Interesting post, on an interesting topic in these turbulent times. :).

Sitting in India and developing products for the world is not impossible. The issue, as you highlighted, is the second level managers who cannot look beyond execution and delivery. How about an approach like this ? It might not be easy to setup, but can work wonders.

Imagine two people with a good rapport. Both of them have worked with customers, and they have a very good understanding of customer and market needs. Put them together in charge of a team in India. The guy with more engineering and PM experience can work out of India, and the other guy (with more sales / marketing exp) can work in the target markets. Exploit their rapport, which will ensure that they will exchange ideas and think alike to develop solutions to meet market needs. Impossible ? Let me know your thoughts on this...
3:45 PM

Very interesting point and the idea looks pretty good. Many of the US based, indian-origin Entrepreneurs are doing similar kind of stuff. But no-one tried the reverse method.

From my point of view, the challenge is to bring the 'core' team together who share the common vision. Your comment prompted me to write one more blog :)
4:42 PM

Unknown said…
Exactly dude. The "sharing" can be done in different ways. I outlined only one possible way :).

Anonymous said…
Great analysis. Wonder how the colloborative models from Enterprise 2.0 paradigm will impact innovativeness of Indian companies?
3:30 AM