November 20, 2007
Recently came across couple of interesting experiences, which prompted me to write this post.

I was waiting in a long queue for checking in and came across Cafe coffee day joint. This is supposedly an exclusive one inside the airport, where the coffee is priced higher than their outside joints. There was a dust-bin kept outside the shop and I was totally shocked to see the state (see the picture below). 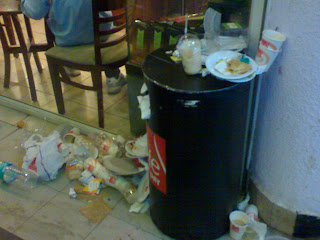 This is the behavior of 'so-called' -- educated, elite, urban, upper-middle class people who are engineers, doctors, businessmen by profession. They can afford to pay 50 INR for a cup of coffee but can't think of disposing the used cup properly; They are representatives of new India and popularly known as 'Global Indians'; They visit multiple countries but just don't have basic civic sense when it comes to their own country; They make the westerners believe that the world is flat but still throw used coffee cups in a reckless, irresponsible way; They write software for Fortune 500 companies but can't even think of behaving properly;

Scene 2: The cafeteria at my workplace

I work for extended R & D arm of a global MNC and all the engineers sit in my floor work on next generation products. In the cafeteria the facility team kept three different bins (see the photo below) for disposing different kind of wastes -- tea-bags, organic and general waste. But still I haven't seen a single engineer placing right kind of garbage in appropriate bins. By end of the day, nobody can make out which bin is kept for what kind of garbage. 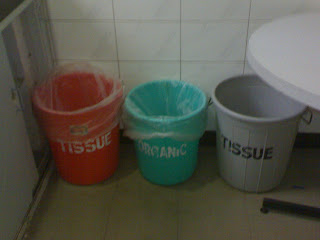 The idea of keeping different bins is to apply proper disposing methods. This is imposed by my organization worldwide to be a good corporate citizen by taking care of the overall environment. But still when it comes to , everything goes for a toss due to the irresponsible behavior of these 'Global Indians'.

If the scene is pathetic in the so called 'Silicon Valley' of (), we don't have further discussions about the rest of .

I now call as 'garbage land' -- consisting of educated idiots!

Anonymous said…
I agree with you. We Indians really don't care for civic sense. We clean our homes by throwing the dirt / garbage on open road. We don't care enough to go upto the public dust bin. Same stories can be seen at all railway stations, bus stands as seen by you on Air Port.
Interestingly enough we all understand but don't apply it. We've learnt Community Living in our schools. Actually its "bade utne khote". I can site example of Delhi Metro. When it was launched in Shahdara area people thought that public in that area is too illiterate to handle such sophisticated train. That track and train is very clean, whereas when Metro was launched in CP and Central Secreteriat the station was decorated with Paan picks and tobacco's. CP and Central Secreteriat are supposed to be good area's, Govt Babu's and Officers work here as well as elite public visits here.(!!!)
We need iron hand rule to reign in ourself and behave properly. We must also associate ourself with our governance.
3:57 PM