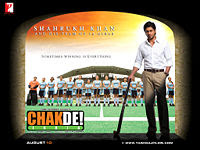 Here is couple of interesting links:
"Winning is everything"

In the movie, the hero (kabir khan) takes-up the herculian task of coaching women's hockey team and finally the team wins the women's world cup. Starting from building a team with complementory skills, the hero demonstrates elements like patriotism,leadership and personal experiences to make the movie interesting.In 2001 'Lagaan' created lot of exicement by taking up a similar story. These type of movies get huge popularity ranging from companies to b-schools. Even though these type of movies are really vital to have a 'positive' thinking going among Indians, they take us very far from the reality. Added to that the movie directors smartly add the required 'sentimental' elements to tap the average Indian fan and make the movie as a box-office hit.

These type of movies portray one 'super-hero', who turn things around for the team. After watching the movie, everybody gets inspired but expect that super-hero to come. Corporates try to gain some mileage out of such movies by making their team members to watch this movie and have some coffee-table discussions. They expect their team members to come more nuclear to perform better as a team. But where is the super-hero to unite them? Thats where the fun begins. End of the day nobody comes forward to take up the real 'responsibility' and these type of movies simply end up a formalities rather than accomplishing something concrete. No super-heros are made just by watching a two hour movie. It requires ample amount of effort added with commitment for a cause to make any signifcant impact. As long as corporates don't
understand this reality, these type of movies will simply be a time-pass formality.
India Society

Anonymous said…
Agree 100%. These movies simply have a "feel good" factor about them. Thats about it.
Real management lessons are very hard to portray in a 3 hour movie.
7:19 PM

Anonymous said…
The management only tries to motivate and find people who voluntarily want to assume responsibilities. I believe it is an essential part of management to do it. Also they need only 1 out of 10 / 20 people for that kind of job.