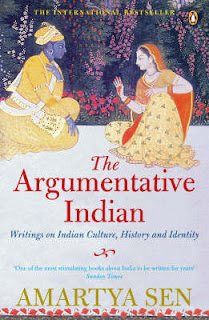 This classic book has been in my reading list for quiet some time now. I have finally started reading it, in a phased mode. Unlike my other book reviews, I am planning to write a series of reviews for this book. This is mainly because of the sheer density of the material that author Sen has presented in this book. At the outset this book illustrates a vivid perspective of the Indian mind.

To start with, Sen explains the ‘argumentative’ nature of , for which it is very vital to understand contemporary . The very nature of Indians is to get into arguments or lengthy dialogues whenever they get an opportunity. Ranging from weekly status meetings to the cauvery tribunal, I can quote numerous examples for this nature. This is due to ‘dialogue’ based approach existing in our culture for a very long time. For example, Arjuna, in Mahabharatha, gets profound doubts in the battlefield. In order to get clarifications he takes up the dialogue based approach with . The author also gives examples from ‘Brihadaranyaka Upanisad’ and ‘Kiratarjuniya’ to illustrate the argumentative nature of Indians. Allowing arguments makes lot of sense in today’s democratic . As is the biggest democracy in the world, providing freedom of expression by allowing arguments is a very crucial element to sustain it. In today’s globalized ‘flat world’ scores against mainly because of its vibrant democracy and expressive media.

Next, the author starts his viewpoints about secularism and diversity. Unlike any country is much diversified -– in terms of language, food, culture, rituals and literature. The long history of heterodoxy of is a basis for its diversified views, which is in alignment with scientific way of thinking. The more diversified any system becomes, it inherently becomes more resilient. I have written my viewpoints on ‘celebrating diversity’ as a separate article.

The political ideology of such a diversified country should be mainly driven in an inclusive way by collectively addressing consensus of all the people. Whichever king or government or dynasty failed to understand this important point has had a hard time ruling and has eventually failed. Among the mughals, Akbar was the only king who understood this and created his own religion ‘Dhin-ilahi’. Apart from him Akbar, Ashoka was the other king to understand in a detailed manner. In the contemporary this concept has evolved as ‘secularism’. Even though other countries like can claim that they are secular, it never allowed any religious symbols in the workplace. After independence the Indian constitution points to the importance of taking issues in an inclusive way for which the ‘secular’ viewpoint is very vital. In a way designing a political ideology for a country like is extremely challenging. This is mainly because every other country in the world is uniform in someway or other.

On contrary to ‘secularism’ the ‘Hindutva’ ideology was created by Veer Savarkar. Fundamentally the Hindutva is based on two main points:

This Hindu political moment was fuelled by ‘Hindu-mahasabha’ and organizations like RSS, VHP, BJP and Shiv-sena are some of organizations spawned from this ideology. In this book Sen argues, looking at with this myopic view will create religious fanaticism. He gives examples of Ayodhya and riots when this Hindutva ideology got the political backup.

I am of the opinion that, religion cannot be ruled out of the political arena completely. Given ’s diversity there needs to be a common ‘bonding’ factor to bring people under one umbrella. Let me throw some of my questions:

End of the day there needs to be a law of the land and everyone should follow them. If that can be brought by using religion, I welcome that. At the same time I am not arguing for religious forces, which will vandalize the societal harmony. We are singing too much of this ‘secular’ song for the past 60 years, whereas continue to be ‘pseudo-secular’ in reality.

Shantanu said…
You are right about the fact that there is a lot packed into this book. Took me a while to complete it.
7:20 AM