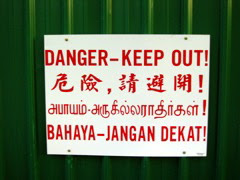 I am currently in Singapore on an official visit and explored this country to certain extent. Even though English is spoken everywhere, they have given the much needed importance to three major local languages: Mandarin, Malay and Tamil. They have kept these official languages in best interest of all major sectors of the population. This is very well reflected in their education system. In their Primary School Leaving Examination (PLSS) they must choose their mother tongue along with English. Following is an excerpt from Wikipedia:

This is a classic example for giving importance to vernacular language along with English. Also this is in shark contrast with India, where any student can get away by not knowing to read or write their mother tongue. In my blog titled ‘education in local languages’, I stressed upon this point and Singapore is a standing example where the diversity is taken as an advantage. Apart from learning the language in schools, it is also widely used and practiced. In all public places and notice boards all four languages are used. I had been to an Indian restaurant, primarily run by Tamilians and I was so surprised to see Tamil in the bills.
Why am I stressing on this point? Why should we learn any of the ancient Indian language? What is the importance of that in today’s globalized world? The answer is very simple: identity and belongingness. Learning local language creates an identity for a person and makes them understand our ancient past. When it is not there, people tend to ape the other cultures without even making an attempt to learn what India is all about. This creates a basic disconnect with the roots of the system and finally makes them not to understand the fundamental problems like poverty, caste system and illiteracy.

We should learn from countries like Singapore and accept the fact that Indians should learn their mother tongue. This might seem very simple but it goes long way in empathetically creating a diversified society, where India’s core strength lies.
Education India

Anonymous said…
first we should accept and repect to talk in our mother tounge..

i'm not sure whether the tamilians are giving importance to there language..?

Then we can find the route to ancient Indian language...