BOOK REVIEW: No fullstops in India 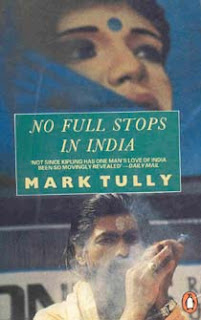 When couple of my friends presented me this book as my birthday gift, I was not sure whether I will like such 'story telling' type of book. After reading pretty good number of non-fictional books, I opened this book with lot of suspicions, but it turned out to be one totally different. The author Mark Tully, conveyed his idea of India by writing ten simple, real but thought provoking stories who is the chief of the BBC bureau, New Delhi. He is an India born British, educated in England and currently living in India.

What is the topic 'No full stops in India' is all about? How do I interpret it? What is the meaning I get out of it? The answer is pretty complex and requires deep understanding about mother India. Compared to other countries, India has a long history behind and it is much more diversified than any other country in the planet. I keep telling my friends the following statement: 'If you travel for more than 100 kms in India you will see difference in terms of food, road signs, religious practices, customs, language and dialects. On contrary in the western world everything looks uniform and unified. The McDonald's fries in the NY city will taste the same in San Francisco'. This diversity is very unique to India and it has got its own advantages and disadvantages. Even though we are moving ahead as a country, there are still deep rooted issues like poverty, caste based discrimination, illiteracy, religious fundamentalism and cheap politics.

On the other side the educated, elite and urban living people of India behave as if these things do not exist and try to ignore them. For example, when Muslims in India refused to sing ‘vande matharam’, CNN-IBN was asking opinions from some of the college students from Bangalore. One of them was telling ‘Government should be working towards infrastructure development instead of debating about vande matharam’. I felt pity about that student about his ignorance. Without solving a fundamental problem like vande matharam, how can we expect to develop infrastructure? How can the society can march forward when the growth is not inclusive? This is exactly what Mark Tully is trying to convey through this book. In his own words he says ‘India's westernized,elite cut off from local traditions want to write a full stop in a land are there is no full stops’.

To support his point, the author has shared ten real time stories. These stories cover areas like child labour, dalits and their societal problems, Hindu-Muslim religious issues, communalism’s positive impacts in West Bengal, religious beliefs of Indians like sati, rural Indians and their habits, kumbh mela and naga sadhus, religion based politics, excellent work done by some of the NGOs at the grass root levels and the list goes on and on. In each story the author has presented both positive and negative points of certain habits, rituals, practices existing in India over thousands of years.

At times some of these stories get a little dull and boring when the author tries to explain every simple thing again and again. May be for a western reader this might look interesting but being an Indian I felt author elongated certain points repeatedly. Overall I would recommend this book for people who want to understand more about India and looking for 'story telling' type of book.

Following are some of the excerpts from the book, which I liked:

The impact of British and aping the west:

"To many Indians, the turn that the country (India) has taken after the fifties has been of great concern. This era is described as the era of the second colonization. A colonialism that colonizes the mind in addition to bodies. The West is now everywhere outside in structures, and in minds. The colonized Indian mind believes that all answers are from the West and acts accordingly. The priorities of the Indian society have been altered beyond recognition"

"What is Indianness today? The basic thing in India today is mediocrity. It has never been so mediocre as it is today. I feel it is stifled by the mediocrity. All our genuine intellectuals live in the West. We need another infusion of the West here. The freshness has gone out of this country, because people stopped reading and thinking thirty years ago"

"It saddens me to think of the progress made by Hong-Kong and Singapore and to compare them with Clive street (in Calcutta). But then India faced very different problems – particularly the problem of large scale poverty, and Nehru chose socialism and a protected economy to deal with that – so Calcutta's trading activities were inevitably curtailed"

"The politicians and the press continue to blame the riots on religious fundamentalism. This may be convenient for the politicians and fashionable for the press, but according to the victims – who ought to know the best – its just not true. The victims of the riots doesn't even know that it is not the religion that divides them"