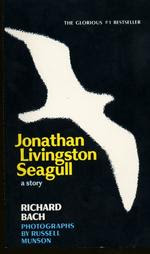 This is one of the ‘thin’ books I have read and the message conveyed is like a ‘capsule’. So just swallow it blindly! It is written in with simple but powerful words, which coveys a strong message: ‘Don’t keep doing mundane things and get frustrated with life! Passionately explore and learn to the fullest extent’. The author Richard Bach conveys this message thro’ a fictional story of a seagull named Jonathan. Looking more deeply, this book touches the basic philosophy of life. In a way this book is similar to another book ‘The Alchemist’ which I have read couple of years back.

Coming to the story, Jonathan belongs to a seagull family whose main activity is to scout for food and survive. He belongs to a flock of seagulls, which keep doing the same task and never thought about anything beyond that. They don’t understand the purpose of their life and the reason for their existence. Frustrated by this, Jonathan wants to explore his passion for flying at very high altitude in high speed. He keeps practicing this alone and the fellow gulls including his parents feel it is not worth doing it. ‘I don’t mind being bone and feathers, Mum. I just want to know what I can do in the air and what I can’t, that’s all. I just want to know’. With this curiosity and the great joy of flying high, Jonathan keeps flying alone. Ultimately finds two other gulls like him in heaven.

These new gulls take him to a ‘higher plane of existence’, where he meets other gulls who love to fly. He discovers that his sheer tenacity and desire to learn make him ‘a gull in a million’. Jonathan befriends the wisest gull in this new place, named Chiang, who takes him beyond his previous learning, teaching him how to move instantaneously to anywhere else in the universe. The secret, Chiang says, is to ‘begin by knowing that you have already arrived’. After learning these new flying techniques, Jonathan feels the need for teaching it to other seagulls in the earth and comes back to earth.

Here is where the story makes a transition from inspiration to leadership. Jonathan selects a group of gulls, who are interested in flying and teaches them his techniques. Here the author indirectly conveys the essence of inspirational leadership. The simplest form of leadership is very simple and very hard to demonstrate: ‘leading by example’. Jonathan teaches the joy and excitement of high flying to some of his fellow gulls from the flock and helps them to realize the purpose of their life as well. He teaches them ‘The only true law is that which leads to freedom’. This is in consistent with Stephen Covey’s 8th habit: ‘Find your Voice & Inspire others to find Theirs’.

Unknown said…
dear jay
the review written is brilliant and the points that you have brought out,conveyed in this book is good too.. you could have included the part where Jon says'your whole body from wingtip to wingtip is nothing more than your thought itself in a form that you can see.Break the chains of your thought and you break the chains of your body too..'its soo relevant to any human being who says they cannot do something.. its basically because they have a preconceived notion about their ability.. isn't it?
also this book speaks about heaven in its actual sense.. that its not a place not a destination but its just being perfect.. so simple.. so pure and so true..and perfection is not in terms of numbers because we are unlimited anything that limits us in terms of numbers is not perfect not us..
glad you enjoyed the book

Jayakumar Balasubramanian said…
Thanks for your comments and suggesting this nice book to me.
4:06 PM