February 12, 2007
In my blog titled ‘Am I proud to be an Indian?’ I briefly touched upon Indian’s glorious past and the abundant knowledge in Vedas and Upanishads. Having said that it is very difficult to interpret Vedas and understand the real meaning. This is mainly because the language of Sanskrit is much more complex than any other languages and each word conveys many meanings. But my simple question was ‘If we have so much of knowledge and intellectual wealth, why can’t we use them for welfare of human beings?’. To my surprise, recently I found one classic example for this. Before getting into the details let me give some background information.

One of my very close friends is working for an IT company in and couple of months back they celebrated ‘technology day’ in their organization. They invited Mr. Satish Chandra (who has supposedly demonstrated power generation using Vedic methods) for a guest lecture. I also got to know from my friend that he has proved that the output energy generated is more than input energy. How come it is possible? All I know is output energy can be less than or equal to input energy and the efficiency of any system cannot be more than 100%. It was surprised and got curious to know more about that. Couple of weeks back we visited Mr. Sathish Chandra’s institute and got a chance to interact with him for four hours. He explained his work in detail and gave a demo of his power generation prototype. Boy! It was really awesome.

Basically the Vedas (which are written in Sanskrit) can be deciphered in three ways. They are Adhyatmika (for general public), Adidaivika (rahasya or secret) and Adibhouthika. The first two methods are already interpreted by many Sanskrit scholars but nobody has attempted the third method. Mr. Sathish Chandra has successfully interpreted them using the third method and using one of his interpretations he has come up with a prototype for electricity generation.

Mr. Sathish Chandra has deciphered the ‘purusha-sooktha’ (which are part of Vedas) using the Adibhouthika method. It is very difficult to interpret in that method and he has done it by doing very deep meditation. Let me take an example and explain how it works. (Please not that I am not getting into word by word interpretation).

If it is deciphered normally, we get the following meaning:

With Thousands of heads, Thousands of eyes, and Thousands of feet, he (the supreme god) moves, as all of creation verily is he uncountable. He is beyond the grasp of the hands of men.

Now let us see how Mr. Satish Chandra has deciphered:

Out of the ten directions, in 8 directions excluding earth and sky and by firmly installing 8 gadgets (alternators) on the circumference of a circle, which contains numerous positive and negative charges, such that each one will face their own charges i.e. positive to positive and negative to negative and by rotating a runner like earth in a cylindrical way (in the centre) in between them will generate energy.

Based on his interpretation, he has come up with a prototype (see the first picture below) where he has used four magnets (static alternators) and one motor (runner) in the centre. The common runner and the static alternators are mechanically isolated from each other and are magnetically coupled. Just by rotating the common runner all the static alternators generate power independently. The common runner may be rotated by means of a diesel engine or water turbine or steam turbine or an electrical motor. For the prototype model he has used a 126 Watts of motor. Using this he is able to drive power of 303 Watts power for 12 chimney bulbs and 8 tube-lights (See the second picture below). 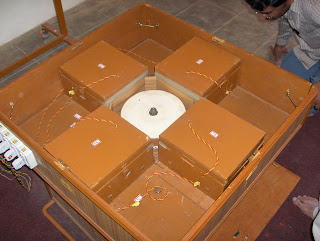 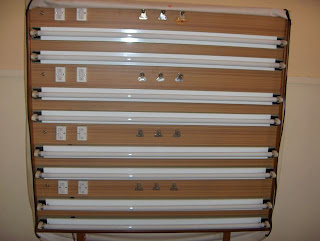 I was really excited to see the bulbs glowing in the prototype model. Mr.Satish Chandra claims that using his model electricity can be generated at 50 paise per unit. He is been struggling to justify his idea to the scientist community of . After struggling for more than twenty years in committed reading, deep meditation he was able to decipher the sukthas. Recently he got about 10 million dollar funding from and he is planning to file a joint patent for his innovation and take it forward.

At the personal end Mr. Sathish Chandra holds a bachelor degree in Electrical Engineering from Malnad engineering college and post graduation degree from IISc Bangalore. In the year 1981 he was posted in Orissa state electricity board, where he understood the need for generating low cost electricity for . This passion drove him to read all ancient texts co-relate it with modern science and innovated this new method. He was also able to explain the ‘deepamalika raga’ using which tansen was able to lit lamps in during Akbar’s period. I was not able to understand much because he was using too many terminologies. He claims ‘On implementing this research work will not only sound an everlasting answer to the power crisis of the world but also spread the pride of Mother India to its Zenith’.

In the end my mind started asking more questions. How this prototype can be productized? Is it a scalable solution? What are the intricacies of using this in homes and rural areas? If the output is greater then input, whatever I studied in Science is wrong? If our Vedas are so superior in knowledge why no-one has ever made an attempt to interpret them in the past thousand years? I am sure that I will not get an answer in the near future but I would any day appreciate the passion of Mr.Satish Chandra and his persistent effort to do something for the country. Whatever may be the outcome, his in-depth knowledge, passion for , humbleness and philanthropic thinking is really amazing!

If you don't mind may I suggest few changes to your blog,

To add further to your blog, the experience we had on that day was amazing & highly respectable about the vedic power capabilities. Further as the last para of Jaya suggests we should find an efficient way to productize & scale it appropriately to make it available to common people.

Thanks Jaya for putting up this blog.
8:03 PM

Anonymous said…
something's missing... this cant be true! The power consumption has to be greater than 303W.
10:59 PM

Jayakumar Balasubramanian said…
Thanks madhukar for your comments! I have updated the blog now.
1:28 PM

Anonymous said…
Very interesting, and is a very different view of looking at Veda's. But I could not comprehend the link the sutra you have mentioned and actual experimental set up. Do you have a more detailed information about this sir?
5:24 AM

Jayakumar Balasubramanian said…
Yes. I have the contact details of this gentlemen. Please write to me at b_jayakumar2002@yahoo.co.in and I would be glad to give you the information.
2:02 PM

Anonymous said…
i am mechanical engg. & i am in last year of engg. after diploma i read about s.chanra's sky generation & i deside i work on this project so please help me & give details about how to read vedas & how to develop machine for sky enetgy generation
9:13 PM

mechanical autocad designer and drafter said…
sir,
i am a mechanical engineer, i want to work on perpetual machine to generate electricity. with the help of vedas whether it is possible?