Reflections on 'The Guru' 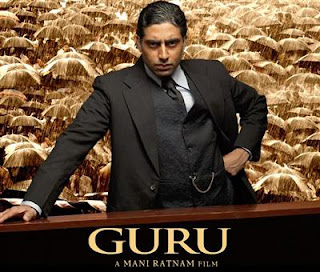 I like only two type of movies: serious and comedy. Since Mani Rathnam's 'THE GURU' belongs to the first category watched it on the theater (after a long long time). Overall the movie was pretty good at the same time raises lots of questions about building businesses in India. Before getting the business, let me quickly run thro' the movie.
The hero Gurukant Desai, who hails from a small village in Gujarat moves to Turkey for employment and make some quick bucks. Because of his hard work and commitment (and of course his shrewdness)he raises very fast, but comes back to India and starts his own company. The first set of scenes itself says that 'Guru' is the story of Dhirubai Ambani and Reliance. If not for anything I would appreciate Mani's attempt to make movie based on real life heroes. Long time back he made an excellent Tamil movie called 'iruvar', which was a neat sketch of lives of MGR and Karunanidhi. Unfortunately it was a commercial failure but I liked the movie. Unlike the typical 'pyar mohabbath' time-pass movies this movie conveys a message to aspirational, middle-class, hardworking people.

When the hero Guru starts his 'Sakthi trading corporation' in 1950s 'license raj' environment he faces lots of problems from the government and nethas. In order to race ahead in this adverse conditions Guru 'bhai' gets dowry, tilts the government, irks the authorities and finally emerges as India's biggest business powerhouse. Now what is the message conveyed? In order to become successful and wealthy do an individual needs to take Guru's path? Do we need to consider his strategy as a formula for success? Before coming to the conclusion let us analyze the 'license raj' a bit more.

In his book 'India unbound', author Gurucharan Das explains very clearly about the license raj and how it ended up as a zero sum game for India's economy. After independence, 'India' (read 'India' as Nehru) embraced 'socialistic-democracy' as the main ideology inspired by the erstwhile USSR. Unlike USSR, in India it worked in reverse way by as it ultimately ended 'capitalism for rich and socialism for poor'. The big, rich, fatty businesses were growing leaps and bounds whereas the poor suffered big time. The impact on corporate sector is even worse. Every corporation was owned by the government and in order to open a private business house, one has to go through all sorts of pain by applying for licenses. The word 'competition' was literally wiped off and the Entrepreneurial spirit was burnt in the infancy stage itself. Except for family owned businesses (which was more inherited from forefathers) new ventures were totally out of the scene.

What does it lead to? One end it lead to incompetent, lazy, red-tape public sector organizations and in another end small businesses were killed. Today all public sectors (except a few) have become 'sick units' and government is trying to slowly get rid of them by 'disinvesting' its stakes. Even some of the very few successful PSUs failed miserably and made no difference to people's lives. I don't see any device made in BHEL or BEL or NTPC is ever been useful to any average middle class Indian. They might have built boilers, electronic voting machines, power grids or transformers but where do they stand today? Did these organizations built any products at low cost? Did they invent any device which made life easier for a farmer? Did they create any product which is competing at the world level and stand for any unique values? Did they create any healthy competition? The answer is BIG NO.

In this kind of environment if an aspiring individual starts his business how can he think of making it big? That too going by the rules of 'sahibs' of 'license raj'? And anybody (like Guru 'bhai' in this movie) tried to 'work around' this system we call them 'un-ethical'. There was only one way out and where is un-ethical comes into picture here? If we call that as un-ethical what about today's knowledge industry? Can we call all companies in the world are 100% ethical? What about ENRONs of this new world? What about insider trading that happens in the services industry? How many of us are aware of one engineer billed under two different projects? How many of us know about companies cook up their employee's resumes to get a new project? Is it not un-ethical?

In my opinion the 'idealistic' environment never exists and ethics is totally subjective. Why do I say that? Let me take one example from from Ramanaya and Mahabharath as well. How did Rama kill Vaali, brother of shughreeva? Is it the correct way according to the war principles? Didn't lord Krishna shout 'Ashwathama hata' (to confuse dronacharya), which eventually killed drona? We accept them because it was done to protect 'dharma'. I would augment my opinion to that and say whatever Guru 'bhai' has done is to protect 'business dharma' which created a lot of wealth, generated lots of employment which has a significant positive impact in the society. In fact this is what Mani Ratnam clearly conveys thro' Guru's final dialogs in the court.

Overall it was a nice movie with a lot of messages!
Technorati tags:The Guru,License Raj,India,Business,Ambani,Entrepreneurship
business entrepreneurship India leadership

Anonymous said…
hmm .... funny !
i must take up psychology !
i`m always wondering
-about people having predujices on things or other people because they have something in common
-and to what extent ones imagination can stretch to support his gut feelings
12:43 AM

Jayakumar Balasubramanian said…
Hey tresspasser, As my blog name says these opinions are straight from my gut and I don't necessarily be predujices. I think you are still living in the idealistic world. Have you ever tried to srike a business deal ? if you try and you will understand what I am trying to convey.
8:47 PM

Sandeep said…
Jaya, I felt that all Guru worked for was for his own benefit with not much philanthropic intentions. Yes the side effect of it created lot more oppurtunities for many others. Also came the concept of public issues.
8:39 PM

Jayakumar Balasubramanian said…
Sandy, Everything has got its own pros and cons and it depends on how you take it. In my perspective any business or enterprise doesn't exist for the philanthropic intentions. The main motto is to generate wealth and in that everone including the stakeholders, society and management benefits.

The Guru belongs to 'license raj' time-frame where it was almost impossible to be successful for first generation Entrepreneurs.
1:25 PM