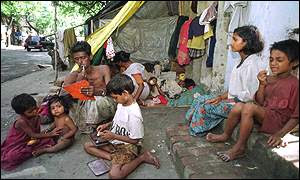 The Times of India recently launched 'India poised' campaign showcasing India's achievements and problems in various areas. I am able to see the big-B's TV appearance, huge banners near Richmond road (Bangalore), with this new fad. With India's republic day is nearing, TOI can get some premium and publicity by initiating such things. These initiatives definitely bring in 'feel-good' factor among Indians at the same time there are lot of crude realities, which we need to digest. With over 5000 years of history and 57 years of democracy, I started asking a simple question to myself 'Am I proud to be an Indian?'. After deep introspection within myself I got the answer 'yes and no'. How come I can get two answers for a 'yes' or 'no' type question?

I feel very proud when I look back India's glorious past. When the red-Indian tribes were living in north-American jungles, we had a great civilization here. Traces of Indus valley civilization shows the signs of democracy, knowledge about sanity system, collective living and so on. The vedas and upanishads are great source of knowledge even though it is very difficult to interpret them and understand completely. Recently Germans discovered that sanskrit is the best language for computer software usage (I am yet to dig more on this). If westerners can be proud of their management theories by showcasing Peter Druker and Stephen Covey Indians have much more to showcase in Arthashastra (Chanakya) and Thirukkural (Thiruvalluvar).

If westerners boast of their medicines, Indians had ayurvedha as answer. Pathanjali had yoga-sutra, which is proven technique for physical fitness and natural healing.We had great universities like nalanda, vikaramasheela which are equivalent to today's MIT and Stanford. Students from various parts of the world used to get educated from these universities. Indians invented 'zero' without which there is no computers today. We have great architecture and symbols like tanjore brahadeeshwara temple speaks for the high caliber talent in those times. Yes! I am proud indeed when I look into this past! Mera bharath mahan!

Having said that what has happened in the last 1000 years of the history and whats the state of affairs today? We were invaded by every other country in the world and lost tones and tones of materialistic and intellectual wealth. Apart from loosing them, we allowed the British to program our minds by adopting their way of education system. Now let us take latest picture:

At the personal level, let us talk about the morality and responsibility of Indian citizens. We don't keep our streets clean, we spit in public places,We don't follow line discipline, We keep complaining about anything and everything without taking 'responsibility' for anything. If we can boast ourselves as a 'tolerant' country by allowing all foreigners inside, why my fellow Indian cannot tolerate for the traffic light to become green? Why should he keep honking his horn when the signal is showing orange? What about the sanitation system? Even today my town school (where I studied) don't have proper toilets and some residential schools in Karnataka has got 1 toilet for 40 students. Whereas the rich-urban kids are talking about writing IIT-JEE entrance test.

How much amount of economic liberalization benefited the rural Indians? How much amount of technology has penetrated farmers in order to empower them? Except for the mobile phone connectivity and a good banking system I don't see anything happened for the rural India. I am writing these things based on my experience as I belong to sub-urban town and some of my school friends still make their living by driving auto-rickshaws, working in garment industry as daily wagers and doing the small-scale builder's job. At the same time our CNN-IBN and NDTV would be conducting polls like 'Is India shining or not?' and conclude that we are doing great. Rubbish! Sitting in a AC room in any metro city how can they predict whats happening at the grass-root levels? Now if I ask myself 'Am I a proud Indian?' the answer is a define 'NO'.

In conclusion I would say we need to take the pride of our glorious past and build a great future. My motherland has got so many problems, so what? After all she is my mother. Its time to show more in action than in words.

I was also going through the Indiapoised website.Found some eye-opening statastics which explains how one India is fighting against the Bharat.

I believe Indians are responsible for this difference and divide within India.Indians are becoming more and more right conscious.Whereas the need of the time is to be duty conscious.

I too a part of this community.However we need to learn from our mistake and shouldn't repeat the mistakes.
11:56 AM

Jayakumar Balasubramanian said…
I agree with you.But basically we are not taking responsibility of what we do. You don't need any statistics to prove this fact. Just travel to the rural India and you will find the truth. Except for the mobile phones, cable TVs I don't see any significant changes and the so-called growth is not 'inclusive'.
12:41 PM

Anonymous said…
That is anice way of looking . A country progresses as result of two factors a0 civilization2) intelligence.
We lost both to the marauders who plundered us our wealth and women because we did not lay stress on strength and security of citizens. As we inprove ourselves with high tech and good business practices we are bound to develop the security mechanisms; our tolerant culture will brIng about a reformation even among the confounded anarchist ,the process may witness uneven distribtion of materal wealth , all will be remedied by say 2020
Let us not talk of distribution before creating prosperity .Rich professionals cannot hold on to their riches for a long time . The greatest good will be done if moral education is reintroduced in school.
12:41 PM

I come from a village turned into a small town namely paralakhemundi.Had seen poverty from a arm's length.Each experience from childhood will be a story.
11:08 PM

Jayakumar Balasubramanian said…
Thats great! Only people who come up in hard way would understand the realities.
2:02 PM

Anonymous said…
hmmm ...
the biggest problem is over-population. Because of this,
if something good is happening, there will be a 100 bad things happening counter-productively.
if someone does something good, there will be 100 people who will do the opposite.
I dont know what to call a person who believes in India shining.
If i were blind even i wouldnt believe it !
Cant even hope !
1:05 AM

Jayakumar Balasubramanian said…
trespasser, your comment exactly shows how we give 'reasons' and don't take responsibilities. We blame on population, caste, politicians, etc. I am sick of hearning reasons.
8:49 PM

Anonymous said…
I don't agree with tresspasser's belief on the population (as how majority of us have been taught to believe). We have been told all along to control population - have you ever asked why? because the government could not provide the basic amenities i.e. infrastructure, health, education etc.

I can write an article on the ways of doing that - some other time.
8:02 PM

Jayakumar Balasubramanian said…
Giridhar, I completely agree with you. The 1 billion population and diversity should be seen as an opportunity rather than blaming on it. What we should blame is the inability of we Indians to capitalize on that.
6:42 PM